On Feb 21st, 2014, our 7-12 staff have a professional development day scheduled – and this year, the focus will be on differentiating with technology.

Q1. What is the theme/topic? and how did we come up with that?
A1. Last month we met with a group of teachers from our district PD team along with representation from the teachers association. We started by brainstorming ideas/topics, and after reviewing, the group felt the most common tool for all content areas was Google Apps.

Q3. What is the format?
A3.  It will be conference style – meaning that multiple concurrent sessions will be available through out the day.  Each staff member will be allowed to select each session based on their own individual needs.

Q4. What types of sessions will be available?
A4.  We are working through specific sessions titles and descriptions now, but many of the sessions will be around Google Apps, although we’re also looking at sessions on Infinite Campus Grade Book and assessment using student phones/mobile devices.

Q5. Will the sessions be hands-on?
A5.  Most sessions will have some time dedicated to hands-on, although some sessions will demonstration only.  We will have have each session labeled clearly so you’ll know what to expect.

Q6.  Will staff need to bring their laptops?
A6.  Yes.  If you do not have a district issued laptop, you are welcome to bring your own personal device or check one out from your school’s existing laptop carts.

Q7. Are all the sessions at the beginner level? or will there be leveled sessions?
A7.  We will have a mixture of sessions – both introductory and advanced.  Staff will have the option to select the level that is appropriate for themselves.

Q8. Will each session/course be offered just once?
A8.  We are looking to offer each course as often as its needed, based on an interest survey that we are conducting with staff during the month of December.

Q9. Are all the trainers internal staff members?  or are we hiring outside individuals?
A9.  The sessions on Feb 21st will be conducted by a mixture of internal staff members, external resources, and AEA resources.  In most of our previous technology sessions, we have relied on only internal staff members as trainers.  However, for the Google Apps topics, we feel that we need assistance from outside resources for this topic.  In addition, once we announced that we would provide leveled courses – many of our previous trainers commented that they would like to attend the advanced sessions instead of serving as a trainer.

Q11.  Will staff have to register for specific courses prior to Feb 21st?
A11.  Yes, staff will be asked to register online for their courses – prior to the Feb 21st event.

On March 7th, 2013, our district sent a team to visit the 1:1 roll out at Council Bluffs School District in Council Bluffs, Iowa. This is not our groups final notes or findings, instead, it’s just my personal notes.

Also visit: What students think of the 1:1 chromebook roll out in Council Bluffs, Iowa

What’s your story… why and how did you become 1:1?

In 2009, there was a strategic planning effort that included the entire community and businesses, which selected the goal, which was “one portable device for every student grades 3 thu 12”

They were originally looking at a variety of devices, including a linux based netbook. However in the fall of 2010, they got a call from Google asking them to pilot the Chromebook CR-48

Although Project 500 was open to all staff who wanted to apply, most of the classrooms selected were English or Social Studies.

They stress….. it’s not about the device.

From the high school principal, “It’s a tool, a resource – not a device that is used all day long in every class.”

To help with classroom management, there is simple rule that all classrooms following… When the teacher says lids up or lids down – everyone is to follow that rule.

We just use them, we don’t teach them. Our PD doesn’t include Chromebook training.

Abraham Lincoln High School in Council Bluffs features an entire Engineering Wing. How cool is that?

What results do you expect or have seen?

It changes engagement significantly and it also changes formative assessment, which is now used more frequently. Behavior incidents are also down.

They conduct classroom walk throughs, using a rubric that is based on the Florida Technology Integration Matrix. At this time, they have only conducted one walk through at high school level.

There was more breaks/repairs in the Project 500 phase than during later roll outs. This is mostly due to the way the devices were turned in at the end of Project 500, as well as about ownership. When devices are assigned to individual students, they take “ownership” and there are less issues.

Web filtering is provided for students on the school devices while they are at home or any other wifi location. The is handled through Google management software, which doesn’t involve any software being installed, but instead points the device to your district’s proxy server for all web filtering.

Even if a student does a hard reset on the device – it doesn’t do anything, the machine still returns back to the school district settings once it hits the internet and that include the web filtering.

Theft has no really been an issue.

In talking with student, several commented that even a broken screen is usually repaired by students in the tech center – and done within one or two class periods.

In the tech center at Abraham Lincoln High School, they reported over 300 trouble tickets during the month of Feb.

The cost of a replacement screen is $90, which is affordable for most families.

The most frequent breaks are:  power adaptors as well as where they connect the machine, as well as basic screen breaks.

Having a keyboard was important to their goals.

8 hour battery – in fact, they are finding that even 3 year old machines are still getting 8 hours of battery life

It has an 8 second boot time, which is still true 3 years later. 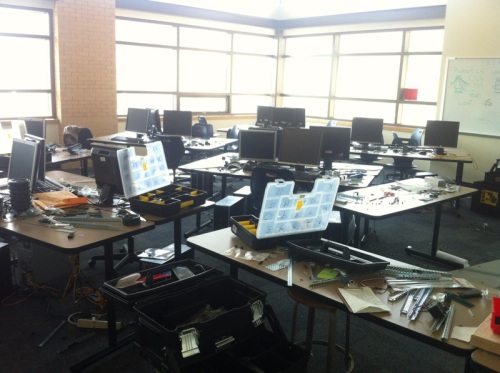 Those who believe that kids don’t create at school – they haven’t visited this room in the engineering wing at Abraham Lincoln High School.

Any 1:1 is only as good as your wireless infrastructure and bandwidth.

Start small and build capacity, which is what they did during Project 500. During this pilot, the laptops were dedicated to specific classrooms, and they received a cart for their room and the devices did not go home.

Building capacity was extremely important for the project to help create the momentum needed to support long-term change.

Who pays for damages, theft, etc?

Families have an option to purchase insurance, approx $25, which will lower their repair costs.

Tell us about professional development and training related to the 1:1 roll out….

Staff participated in a survey, which collected information to help the district understand where each person was at related to technology integration.

Staff were then offered differentiated courses, based on the survey results and desire of the teacher.

Google Docs has the highest usage of all resources.

It’s very important that students get an authenticate audience.

PD program is not about the Chromebook, but instead, its focused on instructional technology and is primarily conference/workshop style.

Some of their schools use Turnitin.com for the submission of written projects. All schools use Google Drive for submitting all work – students create a folder at the start of school, labeled it for that specific class and then share the folder with the teacher. Everything else created in this folder is automatically shared with the teacher.

During the summer, they run Technology Academies, which are 4 sessions that are each 2 hours. Teachers receive a stipend from teacher quality funds for attending. Each academy can take 30 total participants, and each time the academy is offered it is filled.

Big focus of their training is on: Classroom management, which needs dedicated, specific training to help staff

What about physical textbooks?
They are still used in some classes, such as Government, but there is a common understanding that text book purchases will decline over the next 5 years.

After walking the building, most students were seen carrying around a Chromebook and a notebook.

At the start of the school year, the high school used advisory time to teach common lessons on productive group work to help with promoting collaborative projects.

How about special education? Yes, they use Chromebooks just like everyone else – and they use extra extensions as appropriate, such as text to speech, etc.

With Google’s management tools, we have the option to push out extensions and apps that are needed.

White glove services are also offered with Chromebooks.  This means that Google (or a distributor) will add your network settings, inventory stickers, etc to your device before they are shipped to you.  This means they are completely ready to use right out of the box.

They engrave the lid of their machines with their district logo, using their own engraving equipment.

Most Visited Posts (past 2 days)